Care must be taken to prevent water coming into contact with a curing Epoxy film from sources such as rain, dew, leakage from the hydrostatic valve or even high levels of humidity. If moisture has been allowed to come into contact with a LUXAPOOL Epoxy paint film within the first 3 hours of cure, then the chemical integrity of the film may be compromised, and as such the entire coat of paint should be removed and a new coat applied. After 3 hours of cure, the chemical integrity of the film will not be damaged, however surface defects such as surface bloom can still occur, which will present as a milky discolouration or haziness on the surface of the LUXAPOOL Epoxy. Surface bloom will act as a barrier between successive coats of epoxy leading to delamination, and must be removed if additional coats are intended to be applied. To remove surface bloom from intermediate coats, the epoxy should be allowed to set tack free, and then lightly sanded with very fine wet & dry type sand paper. All residue should be removed with a vacuum cleaner before continuing to the next coat. In the final coat this bloom can be removed with a plastic scouring pad and a mild abrasive. Alternatively, if left untreated, the bloom will generally disappear within a few weeks of the pool being filled with water.

Leaves, grit or insects that may be have been trapped in the film during application of initial coats may be removed by lightly sanding the affected area. Successive coats can then be applied as usual. If foreign matter has been trapped in the final coat during cure, it may be removed by GENTLY scraping and sanding the area after full cure of 5 days. Leaf stains on the surface will generally disappear within the first week or so of the pool being filled and chlorinated.

Stains may occasionally appear on the pool coating. These are normally yellow in colour and result from excess hardener leaching to the surface. This will most often occur within one month of filling the pool, and will gradually disappear as the pool surface chalks. Faster removal of the stains may be aided with general cleaning and maintenance (as described later in the guide) but should disappear by itself within 2-4 months depending on the season.

Bubbling or solvent boil occurs when volatile solvents in LUXAPOOL Epoxy, or air in the application surface expand with heat, and then become trapped in the curing paint. This may result if the paint is applied to a hot surface, if the product itself is too hot when applied, or if the applied paint experiences any heating (e.g. from sunlight) during the early stages of the curing process. To prevent bubbling, avoid painting under high temperature conditions (over 30°C), begin application earlier in the day (around 8-11am) while the surface is still cool, and ensure that all LUXAPOOL Epoxy products are stored out of direct sunlight and kept in a cool place throughout application. Also consider the following application tips:

If bubbling is experienced in a fully cured film, (especially important in initial coats) sand the affected area smooth with 150 grit sand paper, and then remove all residue before applying successive coats.

Blistering is the result of poor application techniques, and occurs because liquids in or under the applied film (such as water or solvent) are expanding, forming voids within the coating. The presence of blisters will ultimately result in cracking and peeling of the epoxy coating. To prevent blisters, avoid painting over a moist surface, painting under high temperature conditions (over 30°C), painting over a surface that has been curing for longer than 24 hours and painting over a surfaces that have been improperly prepared. In the event that blisters are identified in an epoxy coating, the entire coat of paint must be mechanically abraded back to a stable and sound surface. After all residue has been removed, any additional surface preparation should be performed before reapplication of finish coats.

Delamination is any loss of adhesion of the paint film from the surface or between coats, and may become apparent anywhere from days to several months after application. It may appear as small flakes to large sheets coming away from the surface of the pool. Delamination from an application surface results from poor surface preparation. To prevent this, always ensure that the surface is clean of dirt, oils, greases or other contaminants, and that the surface is thoroughly dry before application. For unpainted granular surfaces (such as cement render or marblesheen), an acid wash is recommended to promote adhesion, followed by application of LUXAPOOL Epoxy Primer-Sealer as the initial coat. Delamination occurring between coats occurs because the initial coat has completely cured and has become too hard before additional coats have been applied. This might be seen when applying a new coat to an old, previously painted surface, or when applying successive new coats. To prevent inter-coat adhesion issues, avoid painting under high temperature conditions (over 30°C), and always apply successive coats between 20 and 24 hours after a previous coat. For old, previously painted epoxy surfaces, or newly painted surfaces that have been allowed to cure beyond 24 hours, it is necessary to thoroughly abrade the entire pool surface to a dull finish and remove all sanding dust prior to application of the next coat to assure adhesion.

Chalking is a natural weathering process of an epoxy coating, not a result of a defect in the paint or application process. It will appear as a fine powdery deposit on the paint surface, and may retain some of the colour of the coating. Early chalking may become apparent after an epoxy is applied at low temperatures, and as such it is recommended that care be taken when applying during winter months. However, the prevalence of chalking is primarily dependent upon pool chemistry, including both the levels of chemicals used and the stability of these levels, as well as the intensity of UV light to which the epoxy coating is subjected. Chalking may also be accelerated by a deposition of soluble salts from the water onto the coating surface, or by allowing existing chalk to build up. By avoiding factors that cause chalk acceleration, the rate of chalking can be minimised, and this will increase the life expectancy of the epoxy coating. Maintenance of pool water chemistry, and regular removal of soluble salts and chalk build-up from the surface is recommended.

Our gallery showcases LUXAPOOL's incredible range of pool & paving paint colours that have been applied to home and commercial pools. 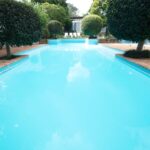 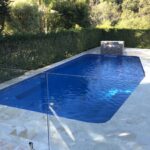 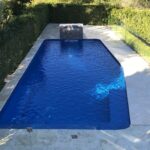 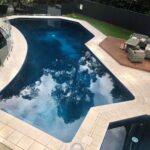 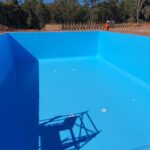 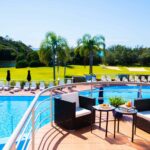